The Origin of the Work of Art: Hearing the Title properly 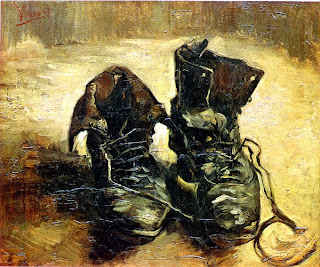 It is very easy to let oneself be misled as to what Heidegger's sensationally received lecture Der Ursprung des Kunstwerkes, is really about. One would think its about art. Certainly it is not a lecture in art history and probably more than one concerning the appreciation of art, but it would seem safe to say its a philosophical lecture about art, a lecture about the meaning of art.

One path that leads towards understanding why this is so begins by listening carefully to something which Heidegger as a matter of routine in all of his self-interpretations stresses the ambiguity of, namely, the name of the lecture, the title. The title seems to be addressing artwork, but artwork precisely in a certain respect, namely with respect to its origin. This appearance is initially inevitable. However, there is another way to hear it, and one of the goals of the essay is to show how this alternative way is, surprisingly, the more appropriate of the two. According to this other way, what should be emphasized in the title is not the artwork, thought with respect to its origin, but rather the reverse. That this is so is indicated in the opening sentences of the lecture, which may be understood as a preparation for the destruktion of what the audience is inclined to have heard in the freshly announced title:

Origin means here that from which and through which a thing is what it is and how it is. That which something is, as it is, we call its essence. The origin of something is the source of its essence.


The lecture is an attempt to show how we can think of origin more properly than all of the history of Western thought has yet been able to by way of a seemingly strange move: by thinking of origin as inherent to the artwork. In the title "The Origin of the Work of Art" the word "Origin" must eventually be heard and understood as a property of art. The artwork does not have its home in its origin; rather, the very idea of an origin has its forgotten home in the artwork. This is why, in the quote above which begins the whole lecture, Heidegger immediately defines ---that is to say, discloses the essence of---the origin. But his definition is peculiar insofar as it implies its own failure; it tells us that the essence of the origin, that is, what an origin is really supposed to be, is to be nothing other than the source of a thing's essence.  But the essence is "what something is, as it is".  Therefore the origin must precede anything "as it is". Of the essence of origin, then, two things may be inferred:

1.) The essence of the origin precedes itself. The origin is, essentially,  pre-essential.

What domain is this? That of the artwork. "Artwork" would then name that which belongs to a domain ahead of and prior to any thinking, a domain which the thinking of the present age of technology can only anticipate --and yet must anticipate if it is to still think at all. The reason why the lecture emerges  as a place of repose along Heidegger's denkweg  then, is not because Heidegger has turned to art in the fight against nihilism, but because in pursuing what the origin originally means, Heidegger comes to find that its meaning is not in thought but in art. One might say that origin properly means in the artwork, and thinking has been lead to give thought to this unthought meaning.

The title "The Origin of the Artwork" now sounds different: "The Origin" --that is the origin itself --"of"--that is, as it belongs to ---"the Artwork" (the artwork, which lies ahead of thought).

Pseudonoma
Boston, MA
I am a featherless bi-ped or a long pig. Feel free to email me at sinnvonsein@yahoo.com